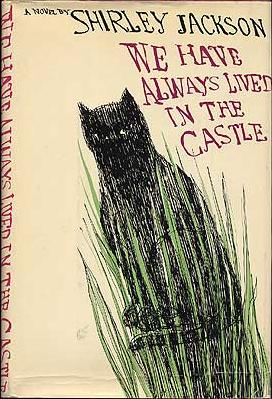 The last two-weeks´ books I read were Comet in Moominland by Tove Jansson and We have always lived in the castle by Shirley Jackson.

The first one is a children´s book about the moomins, which are roundish fairy tale characters with large snouts that make them resemble hippos. The second one is a creepy family story which is set somewhere in rural Vermont.

Moomins and their friends who prepare for a comet that is about to hit their valley.

Two sisters who live reclusively in a castle after a murder mystery killed the rest of their family.

Comet in Moominland is the second of seven moomins novels and this is by far the darkest. Mostly written during the Second World War it deals with the philosophical question of how people should deal in moments of crisis and an external menace.

Shirley Jackson is one of the masters of the ghost story and ‘We have always lived in the castle’ was her last book before she died an early death at the age of 48. As the main characters in the book, Shirley was very troubled towards the end of her life, which is reflected in the book. The book is widely hailed as Jackson´s master piece and has influenced modern writers like Neil Gaiman and Stephen King alike.

“With any luck I could have been born a werewolf”

“It´s strange”, said Moomintroll, “but it seems to me hat we aren´t as afraid as any of those people, although we are going to the most dangerous place of all, and they´re leaving it.”

“I have often thought that with any luck at all I could have been born a werewolf, because the two middle fingers on both my hands are the same length, but I have had to be content with what I had.“

Comet in Moominland has a surprisingly complex plot with loads of small plots inside the main one. All characters they meet on their journey have their own little backstory told. In that respect it is almost like a little predecessor oft he hobbit for younger readers.

We have always lived in the castle is narrated from the point of view of the 18-year old sociopathic Merricat Blackwood. In storytelling terms this is called an unreliable narrator, as the reader can never trust the credibility of the events they are told. In the end the reader has to re-evaluate the point of view of the story and the way they experienced the story, which makes the read interesting yet chilling.

Children characters based on German philosophers

The muskrat, a character from the Moomin book, which is described as something wet and miserable, with shiny black eyes, is based on German philosopher Arthur Schopenhauer who was notoriously grumpy.